Dehradun is nostalgia. Like an old hand-knit sweater of yesteryears unearthed suddenly from an old wooden shelf. Or stumbling upon a handmade birthday card with sweet nothings scribbled all over. Or your last day school shirt copiously inked in kept and unkept promises of your friends. A sliver of time etched in the indelible state of what used to be.

When the early April morning still wore a half-sleeve sweater and the month of June alternated between sunshine and a heavy downpour. When an impromptu ride to Mussoorie was the biggest adventure ever and a halt at the Maggi point was the most romantic destination in the world. When the guests insisted on being served tea and morning breakfast in mother’s dew laden, well-carpeted garden to enjoy the breath-taking view of Mussoorie. And when at night, the sky lit up with a hundred thousand lights of the houses in the hill and you could actually feel the stars at your arm’s reach.

Dehradun is nostalgia. Nostalgia of the smell of Sunrise rusks when inside Paltan Bazar and the customary stop at Gaylord’s. Of rolling roads and two wheelers on them with an utter lack of traffic sense; of cottages and of litchi tress growing in them, of FRI with it's undulating roads and the sprawling Greeco-Roman edifice where you could hear the screeching sound of crickets at night; of the roadside thukpas and momos and the erstwhile Ellora bakery leading upto the school, of Convent schools from the British Era and conveniently short distances between any two points in the town. 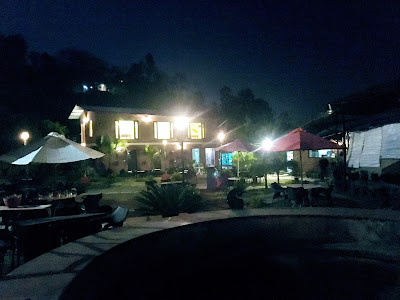 A fun-filled, idyllic, dreamy world like the ones in Enid Blyton novels, of English Book Depot and a coffee shop built into one and of growing up children injecting fervour and excitement in an otherwise quaint, quite, sleepy town, Dehradun is indeed nostalgia.

They say home is not a place, it is feeling. An old habit which dies hard, as trying to take a glimpse into the outside through a blurred windowpane hit by the rain; a wistful peek into the bygone, a reminder to the present and a hope into the future.

May 06, 2011
I hung out with you almost every day. People around talked about us. I didn’t care. I knew you didn’t care either. Life was good.

You took me to various places, you told me about various things, you bought me stuffs (against my strictest opposition) and you added motley of colours to my life.   I liked talking to you, talking to you 24x7, day and night, in and out, talking like two desperate people,  talking like maniacs; talking as if talking was our lifeline ;talking like giving vent to all that  had been pent up inside , talking and talking and still it seemed the thirst was not satiated. People around smiled, sometimes smirked at us.  I didn’t care; I knew you didn’t care either. Life was good.

You flaunted your write ups before me branding them as your original when you had borrowed it from your best friend. Anyway, I always knew the truth.  I personally, liked your own, lucid style and straight from the heart jottings more than the much verbose verses of your friends. Yet, I kept …
Read more